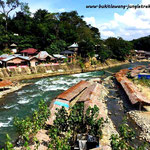 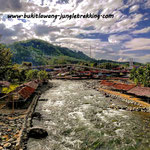 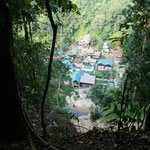 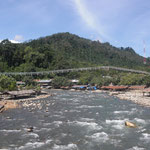 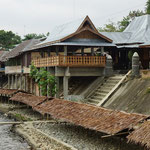 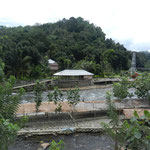 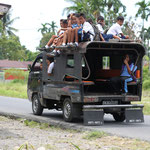 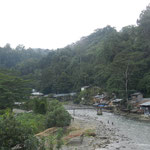 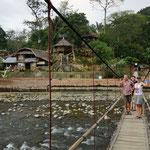 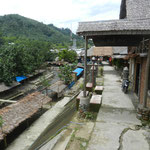 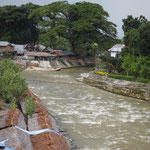 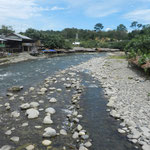 Bukit Lawang is a small tourist village,located at the Bohorok River and 86 km north-west of Medan,Northern Sumatera,Indonesia.

The small village is located nearby the jungle so you have great views and always see the rainforest!

The name Bukit Lawang means "door to the hill" which matches perfect to its main meaning...Bukit Lawang is one of the most popular tourist destinations on Sumatra as it is  the main access point to enter the

Gunung Leuser National Park from the east side-one of only two remaining natural habitats for the sumatran orangutan.

Furtherway Bukit Lawang is mostly known for the Bohorok Orangutan Sanctuary of the sumatran orangutan,the largest one.

The Bukit Lawang rehabilitation center for orangutans was founded in 1973.The main purpose is to preserve the decreasing number of orangutan population due to hunting, trading and deforestation.

In the first years after the center was set up, more and more tourists found their way to Bukit Lawang and so Bukit Lawang became to one of the most popular tourist destinations on Sumatra.

Many tourist come to Bukit Lawang to observe the sumatran orangutan in his natural,wild habitat.

The disaster destroyed the local tourist resorts and had a devastating impact to the local tourism industry in the area. 239 people were killed and around 1,400 locals lost their homes.Local authorities and an environmental NGO attributed it to illegal logging.

After about 8 months of rebuilding,Bukit Lawang was reopened again in July 2014.

But there are much more things to do and to see in and around Bukit Lawang....swimming in the river,relaxing in one of many cafes,restaurants,guesthouses or warungs(typical indonesian cafe) close to the river and enjoying the fantastic jungle view and watching monkeys,swinging in hammocks,tubing down the fresh river,taking a sun bath,walking around in the village and meeting the lovely locals,visiting the bat caves,traditional friday food market,making a barbecue close to the river,joining traditional weddings,listening to live music and local guys playing guitar and singing in jungle surroundings,and and and....

the spirit in Bukit Lawang is just relaxing and many visitors stayed longer than planned or came back:)

You can reach Bukit Lawang by public bus from Medan.

To avoid these discomfort, we suggest you to book your jungle trekking and airport pick up in advance by contacting us.

You can book jungle trekking to see wild orangutans directly in the jungle or there is also a feeding platform in Bukit Lawang which is an incredible chance watching orangutans in the semi-wild.

We are committed to an ecofriendly tourism and feel responsible for humans, animals and nature!

Please read here about our community and environment project

We are proud members of Pack for a Purpose, an initiative that allows travelers like you to make a lasting impact in the community at your travel destination. If you save just a few kilos of space in your suitcase and take supplies for the projects we support in need, you’ll make a priceless impact in the lives of our local children and families. Please click here to see what supplies are needed for our project/projects.